We have no choice. Whether we want economic growth or not, our capitalistic system needs growth to at least match interest repayments in order to remain stable. The associated regular interest income of the ‘net interest winners’ is not only responsible for the fact that the wealthy become ever wealthier but also for the constant pressure for economic growth that seems inevitable. When interest income is not completely and directly consumed but reinvested at interest (which is especially normal practice with great wealth), then the mighty dynamic of compound interest sets in along with a resulting “growth spiral”. With ever increasing wealth, the demand for interest and resulting profits also increases. In order to balance this, new value has to be created – in other words: growth. 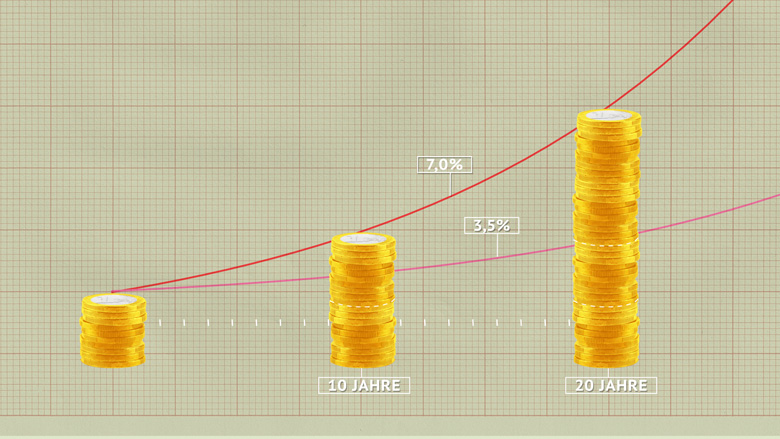 Interest – the driver of growth: at 3.5 % wealth doubles every 20 years; at 7 % every 10 years. When interest income is not consumed, there is an ever increasing demand for more return on interest.

When economic growth is insufficient, the result is redistribution of wealth or more indebtedness: assets are sold, public goods are privatized or demanded by creditors as security. Interest must be paid. Many states have attempted to deal with rising demand for interest repayments by taking on extra loans also requiring interest repayments (debt spiral), in the hope future growth will release them from this burden. Demand for growth and profit also puts pressure on wages. In a stagnant economy rising interest burdens increase demand on business turnover as well as GDP – at the expense of wages. Purchasing power then decreases and with it business profit and growth. This creates great risk premiums for further loans. The only way politicians see to escape these problems is putting permanent growth at the heart of economic policies. Thus politics is constantly busy with “growth packets” and “growth promotion”, in order to ensure the economy remains on course for growth levels at least matching demand for interest repayments.

A constantly growing economy puts increasing pressure on natural resources because a separation of economic growth and resource use one might wish for seems impossible.

Read the other introductory articles on the problems of our money system (Debt, Redistribution of wealth, Financial crises) or watch a 7 ½ minute video summary.

This is an article in our basic course on Monetary Reform

By acknowledging that you read this article (tick the box below), you will be able to monitor your progress through our course in the tiles below even if you take a break and continue another time.