People say the first million is the hardest if you want to get rich. Let’s get to the bottom of this saying by taking a careful look at what an investor can do with a million Euros. He or she can ‘invest’ their money as most banks, investment fund managers and financial advisors suggest: interest payments are a tempting reward and the greater the wealth invested, the more they flow. The great investment funds such as pension funds receive better conditions than individual savers.

With an interest rate of 5%, a millionaire receives 50,000 Euros a year for lending her million. That is more than 4,000 Euros a month – with that one can even afford to live well in expensive cities such as Paris or Munich. If the interest is not consumed but reinvested in the asset fund, then the powerful dynamic of compound interest takes over. Instead of 50,000 Euros interest as in the first year, the millionaire receives 52,500 Euros in the second year and over 55,000 Euros in the third year. Not only does her wealth grow but also the extra income on the capital grows too.

The following table shows how with 5% interest a million Euros grows to 1.6 million Euros within 10 years – without the owner of money needing to work:

At 5% interest the original investment grows by 11 times in 50 years, after 100 years it amounts to 131 million Euros. No wonder people say the first million is the hardest – the second million almost creates itself. Whoever can afford to invest his wealth to earn interest receives a regular income from positive interest rates, which in turn increases his existing wealth. The larger the amounts, the faster they grow through exponential growth.

Where does the interest come from?

Naturally interest also increases the size of even small assets. This is why many people are happy to see even a small increase in the interest rate because it also means income without work for them. But neither interest on ‘big money’ nor interest on ‘small money’ comes from nothing. If we follow the flow of interest to its source, we can understand why the money system redistributes wealth from the poor to the rich. The interest which wealth earns is ultimately paid for by everyone who goes shopping. Every day in every price. What the bank pays to the owners of money as interest it mostly receives from companies to whom it lends the money entrusted to it. Creating credit for the economy brings the bank those interest payments, which it (after deducting its own costs) pays in turn to the owners of money. Where does the economy however get the interest it needs to pay on loans? It naturally includes those ‘capital costs’ in the prices of its products. And these prices are paid for by customers. This is how the interest we receive on savings is ultimately included in the bill that companies give us when we buy goods and services. Thus all buyers pay for the interest received on savings with their purchases. If we divide the German people into ten groups of similar size: 80% pay more interest than they receive from investments or life insurance; for the next 10% of the population interest payments and income are roughly balanced; at the most, 10% of people profit from this system (Graphic 1). 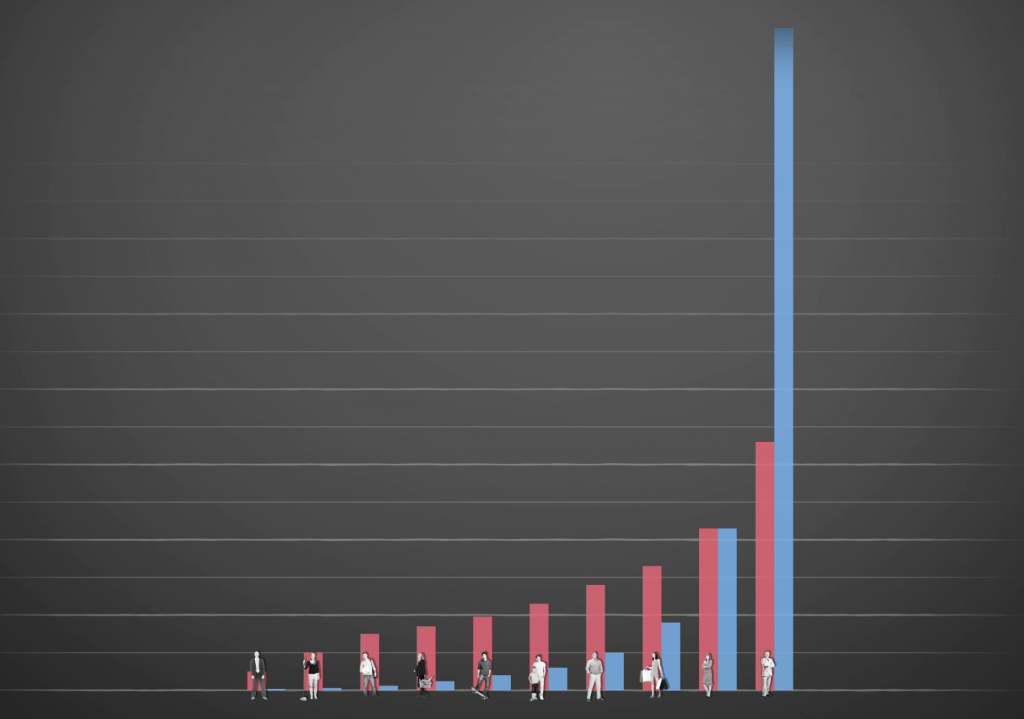 Most people pay much more interest when buying goods and services than they receive on their savings. In our capital intensive economy large investments in machinery, buildings, patents and start-up financing are financed through large loans. Through all stages of the value chain the amounts of interest grow. An average of 30% of the prices of products includes capital costs. That means: every third Euro that we spend on purchases lands as interest in the account of the credit giver 1. Whoever has an overview of their wealth and their monthly outgoings can check this for themselves: do I receive more money from my investments than I pay in capital costs when purchasing? Most people come off badly from this calculation: high interest payments systematically redistribute wealth from the poor to the rich or from the working majority to the investors. If one calculates interest paid against interest earned, one thing becomes clear: the middle class pays the most interest (Graphic 2).

Only the richest 10% of the population wins. They receive about 60% of the interest and with it a regular income without doing any work. The money system ensures systematic redistribution of wealth – from the majority to the wealth-possessing minority (Graphic 3). 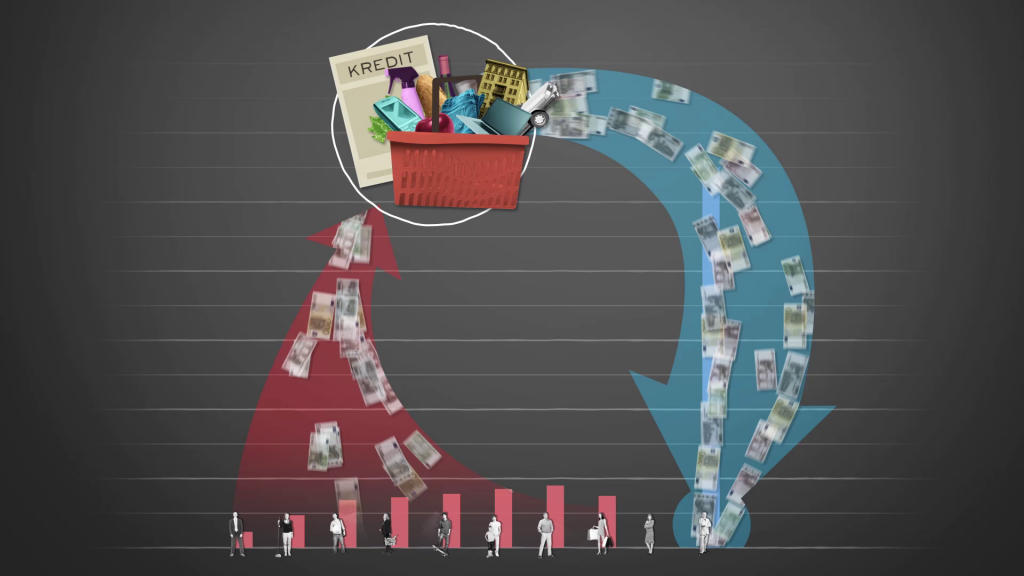 Read more introductory articles about the problems of our money system here on our website (Growth, Debt, Crises) or watch a short MONNETA video to get an overview.

1 A rough calculation from Ralf Becker can be downloaded here as a PDF  (in German).

This is an article in our basic course on Monetary Reform

By acknowledging that you read this article (tick the box below), you will be able to monitor your progress through our course in the tiles below even if you take a break and continue another time.