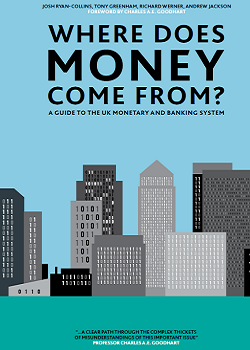 There is widespread misunderstanding of how new money is created. Where Does Money Come From? examines the workings of the UK monetary system and concludes that the most useful description is that new money is created by commercial banks when they extend or create credit, either through making loans or buying existing assets. In creating credit, banks simultaneously create deposits in our bank accounts, which, to all intents and purposes, is money.

Many people would be surprised to learn that even among bankers, economists, and policymakers, there is no common understanding of how new money is created. This is a problem for two main reasons. First, in the absence of this understanding, attempts at banking reform are more likely to fail. Second, the creation of new money and the allocation of purchasing power are a vital economic function and highly profitable. This is therefore a matter of significant public interest and not an obscure technocratic debate. Greater clarity and transparency about this could improve both the democratic legitimacy of the banking system and our economic prospects.

More information and buying option for this book on the New Economics Foundation’s website.