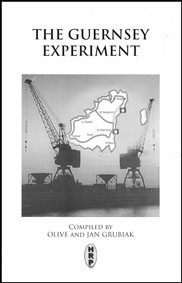 The Guernsey Experiment, pamphlet by Olive and Jan Grubiak, 1960

This pamphlet describes a historically interesting, successful and still relevant local monetary reform on the island of Guernsey from the year 1816 onwards.

After the Napoleonic Wars, Guernsey was in dire straits. Roads being washed away by the sea desperately needed repairing. Unemployment and poverty were high. The main town of St. Peter Port desperately needed a building for its market traders who had to stand outside in all weathers.

Private banks were charging high interest rates for loans to the island’s government. The far-sighted Governor of the island decided to bypass the banks and issue interest-free currency to pay workers to do the necessary public works. The islanders keenly accepted the notes, which circulated freely. Once the new market hall was built, the market traders paid rent in the new currency which went back to the government to pay off the debt created by issuing the original notes. By 1837, States Notes to the value of £55,000 were in circulation on the island. Many public works were accomplished, including building a new college and new schools. No interest had to be repaid and the debt was always retired when notes came back to the government and were destroyed.

This historical case study shows that any local government theoretically has the power to issue its own currency without incurring interest or debt or being made dependent on Private Finance Initiatives that burden future generations.

The full pamphlet is reproduced here.