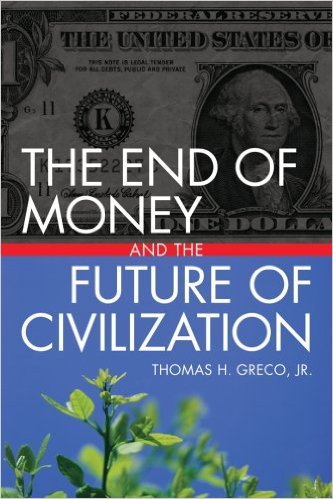 The End of Money and the Future of Civilization by Thomas Greco, 2009

Written in the wake of the global financial crash of 2008, this is an ambitious book with a grand title designed to get attention. Thomas Greco brings decades of accumulated knowledge and experience of money systems to his account of money, power and the alternatives to government fiat money.

The author begins his story by analysing global trends towards centralized power and the ‘contest for rulership’ between two opposing philosophies – elitist and egalitarian. Central banks are in league with an elite global ‘money power’ that manipulates financial systems in its own favour. Compound interest drives an ‘engine of destruction’ against the earth’s capacity to support life.

Greco calls for a separation of money and state then outlines his theory of an ‘evolution of money’ through three evolutionary steps from barter to commodity money to credit money and a final step to his proposed ideal stage of ‘credit clearing’, also known as ‘mutual credit’, in which commitments between traders are simply ‘cleared’ or accounted for in a central system.

The second half of the book describes in detail the practical challenges of getting credit clearing systems to function.

Greco ends with a passionate plea for readers and citizens to get involved in movements for change and to “embrace one another in familial love and without judgment, sharing what we have and supporting one another to realize our fullest potential.”