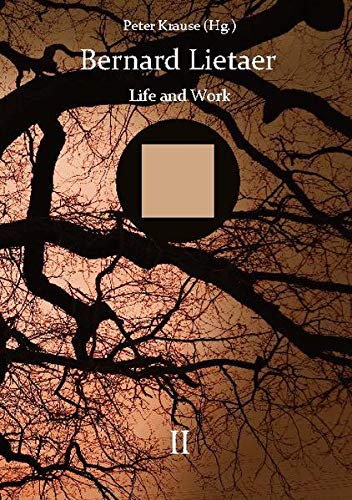 “The other day you said on the phone: Give me a problem and I’ll develop a complementary currency with which you can solve it. And I have to tell you this: Your imagination, your inexhaustible ideas on how to design, invent and transform money, simply amaze me every time. ”  Margrit Kennedy in a letter to her long-time work colleague and friend Bernard Lietaer

Bernard Lietaer passed away on February 4th 2019. For many who deal with new forms of economy and money, this means a trend-setting intellectual beacon and reference point of international standing has died. Like no other, Lietaer’s career and personal journey had encompassed all areas of finance: a celebrated Harvard graduate in 1969 and central banker in the early 80s, he became the most successful hedge fund manager of 1989, and ending as one of the sharpest system critics and simultaneously most creative visionaries of a new, socio-ecological monetary order.

However, only a few were aware that Lietaer’s expertise and reputation were not limited to finance and monetary reform. The recently translated biography of Peter Krause is the first publication for which Lietaer explicitly allowed insights into all areas of his life and work. From two personal conversations during the last weeks of Lietaer’s life, to countless interviews with friends, colleagues and family members, as well as numerous documents found in his bequest or sent in from all over the world – Peter Krause put together a holistic portrait of a most remarkable man. The topics for which Lietaer was publicly known now appear in unison with a much  wider spectrum of lived experience and intellectual prowess. Only very few close friends seem to have been granted glimpses of this wealth and depth of Lietaer interests before, while some elements were published under his literary pseudonym “René de Bartiral”.

In partly factual and partly poetic prose, the two volumes of this biography reflect the author’s fascination with the person he describes, and as if through a retrospective prism, they illustrate an extraordinary and courageous life in all its colorful richness. The first volume contains the actual biography. The second volume supplements it with a treasure trove of pictures, illustrations and previously unpublished texts and interviews. It may seem under-representative that only about a quarter of the text is dedicated to Lietaer’s life in chronological order. But it makes up for brevity by being vividly and lifelike embellished with information from interviews, archive material and an unexpectedly large number of personal details. This conveys intimate insights into Lietaer’s personal, professional and intellectual journey – from his youth in Belgium, through his studies and career, especially in North and South America, to the last months of life in northern Germany – which harbours ever new turns and astonishing developments.

The remaining three topical parts of the first volume sum up Lietaer’s work under the headings “Knowledge”, “Wisdom” and “Mystery”. Layer by layer, they complete a picture of Lietaer that was previously imperceptible to the public. In the section “Knowledge”, his professional career in the financial economy and his role as a pioneer of a new monetary paradigm is mapped through his early and best known publications. Even for those who have already read most of Lietaer’s books, this anthological approach offers new topical links and an appreciation for the incremental development of his arguments.

In “Wisdom”, the psychological and historical approaches that Lietaer already mentioned in some of his publications (e.g. in Mysterium Geld, 2000, Riemann) are introduced and traced through both their biographical and ideological backgrounds. Among other things, it deals with general philosophy, the arch-types of Gustav Jung, and the historic transition from matrifocal to patriarchal societies. In a separate section that is dedicated to the future,various utopian and dystopian scenarios that Lietaer developed in several of his publications are brought together.

The last part of the first volume, “Mysteries”, provides the most astonishing insights into the person Bernard Lietaer. Based on his little-known work on Rembrandt’s self-portraits, this chapter outlines a large number of topics, fields of engagement and influences, all of which were of central importance for Lietaer, but were largely left out of his previously published work. These include art and architecture, Freemasonry, spirituality, metaphysics and practices of personal development. Remarkable here is the depth of the knowledge exhibited in areas that are predominantly considered “esoteric”, i.e. secret and exclusive, and commonly treated as such. This turn towards transparency, if only posthumously, is one of the last gifts of Bernard Lietaer.

The second volume primarily offers accompanying pictorial material that underlines the text of the first volume. It makes the life and work of Lietaer tangible, especially where art, architecture and esoteric knowledge are concerned. It contains a large number of photos – of Lietaer and the objects of his interest – as well as drawings, manuscripts and graphics from his own hand. The effect of this material should not be underestimated for the overall impression of both Bernard Lietaer and this biography. The second half of this volume contains texts through which Lietaer himself, directly or indirectly, is allowed to speak. Two interviews with Tesa Silvestre from 2008 are included here to which Lietaer himself had repeatedly referred to as comprehensive summaries of both his contributions to monetary reform and his personal, spiritual convictions (this latter interview was previously unpublished). This part also contains the first translation of an archaeological-anthropological study about a pre-columbian temple complex in Peru, for which Lietaer first used his pseudonym in 1982.  Finally, Lietaer’s master’s thesis on the management of exchange rate risks, on which his early international reputation and professional success were based, is reviewed here in detailed yet comprehensible language.

The author ends his text with words by Bernard Lietaer, which, published in 2008 under the name René de Bartiral, have only become more topical again in the second half of 2020. Through them, the appreciation and legacy of the life and work Bernard Lietaer lives on:
“As I see it, we are at a key juncture, just a step away from ‚rupture‘; on the edge of the chaos of a major change. This involves a choice between what the English so neatly call ‚breakdown or breakthrough‘ – either we break through to a new level of complexity or collapse backwards to a lower level.» The contribution of one remarkable man to the positive continuation of this human journey on this planet is traced and illustrated in this biography.

This review first appeared in German, in the Zeitschrift für Sozialökonomie, on 08/17/202

You can order the books “Bernard Lietaer – Life and Work“, Volume 1 and 2, by Peter Krause (ISBN-10: 3753443379), through your local bookshop. In Europe, you can also order them through the self-publishing site Books on Demand. In other parts of the world you might have to turn to Amazon for now (Volume I, Volume II).