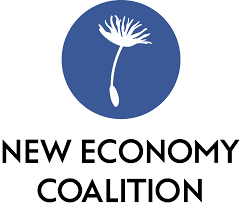 The following edited text is taken from the website of the New Economy Coalition: http://neweconomy.net/

Another World Is Possible. There Are Many Alternatives—It’s Time For A New Economy.

The New Economy Coalition grew out of the work of the E. F. Schumacher Society – founded by Robert Swann and Susan Witt in 1980, pioneers of community land trusts and local currencies in the US – and the UK based New Economics Foundation (nef), founded in 1986, a pioneer ‘think and do tank’ for new economics.

Shortly after the start of the 2008 financial crisis, leaders from both NEF and the E. F. Schumacher Society recognized the need for an organization that could help bring systemic economic alternatives into the mainstream in North America. They collaborated to create a new organization called the New Economics Institute. Around the same time, The New Economy Network was founded by a diverse group of individuals and organizations seeking to amplify their collective impact in service of a just and sustainable economy.

NEC started inviting organizations to participate in the coalition. Since then it has held its first New Economy Week, launched a youth and student regranting program, held a national gathering for young people called ReRoute: Building Youth and Student Power for a New Economy, launched its Racial and Economic Justice Initiative and convened over 700 allies in Boston for CommonBound: Moving Together Toward a New Economy.

At the New Economy Coalition, we’re driven by a belief that all our struggles—for racial, economic, and climate justice; for true democratic governance and community ownership; for prosperity rooted in interdependence with the earth’s natural systems—are deeply interconnected. Rising to the challenge of building a better world demands that we fundamentally transform our economic and political systems.

We must imagine and create a future where capital (wealth and the means of creating it) is a tool of the people, not the other way around. What we need is a new system—a new economy—that meets human needs, enhances the quality of life, and allows us to live in balance with nature. Far from a dream, this new economy is bursting forth through the cracks of the current system as people experiment with new forms of business, governance, and culture that give life to the claim that another world is possible.

The New Economy Coalition (NEC) is a network of organizations imagining and building a future where people, communities, and ecosystems thrive. Together, we are creating deep change in our economy and politics—placing power in the hands of people and uprooting legacies of harm—so that a fundamentally new system can take root.