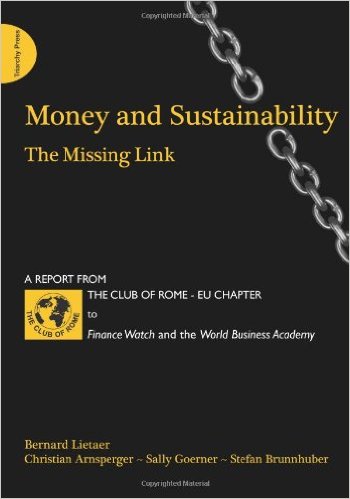 Money and Sustainability: The Missing Link

From an outmoded money system to a monetary ecosystem.

A Club of Rome report.

It is usually said there is no alternative to our current monetary system – while it is quite clear that it is ailing, obsolete and completely unsuitable for overcoming the current crisis in the Euro Zone. Like any other monoculture it is at first profitable but in the long-term it unavoidably leads to economic and ecological disaster. The alternative is a “monetary ecosystem” with complementary currencies, which have already proven themselves many times in practice to be flexible, resilient, fair and sustainable.

“Limits to Growth”, the famous first report of the Club of Rome in 1972, showed how an economic system based on endless growth in a world of limited resources fundamentally undermines sustainability. This new report, published in 2012, analyzes our current monetary system and the errors in reasoning at its heart. The authors – Bernard Lietaer, Christian Arnsperger, Sally Goerner and Stefan Brunnhuber – describe the catastrophic ecological, socio-economic and financial problems that will continue to confront us if we make no radical changes. Finally, they list nine concrete measures that can immediately be implemented alongside the existing money system. This book is essential reading for politicians, business leaders, economists, bankers and anyone interested in the future of the planet.