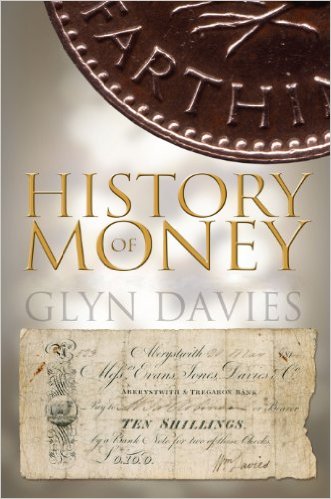 A History of Money by Glyn Davies, University of Wales Press, 1994

This book has become a standard reference work for students of monetary history. Beginning with the earliest developments of money and barter known to anthropologists, the book traces the many twists and turns of money and banking through the centuries up to the modern age.

The story Davies tells is framed by his ‘pendulum swing’ theory of history between opposing ideas about money, particularly the perennial tension between the needs of those who need more money – greater quantity – in circulation and those who want to preserve its quality, usually those with existing wealth.

Along the way he shows the constant conflict between rulers needing money to fight wars and the needs of the population for a functioning medium of exchange, the gruesome fate of convicted counterfeiters, how local tokens drove the early stage of the industrial revolution in Britain and the slow evolution of banking.

The central part of the book has a particular focus on the history of money and banking in Britain and the USA.